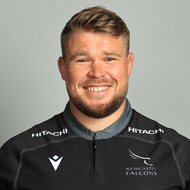 Richard Palframan joined Newcastle Falcons in the summer of 2021. The South-African-born tight-head was educated in Cape Town and played for Natal Sharks Under-19s before moving to England in 2012 to join London Irish, for whom he made 28 senior appearances. Spending a single season at London Scottish before joining Worcester in 2018, his two seasons at Sixways saw him making 43 appearances for the Warriors before making the decision to join Newcastle. Palframan's debut season on Tyneside saw him making eight appearances during 2021-22, with his availability hampered by injuries.