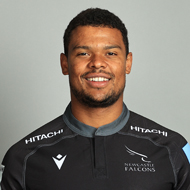 Nathan Earle joined Newcastle Falcons from Harlequins in the summer of 2021. A multiple Premiership title winner, the Hong-Kong-born flyer scored for Saracens in their 2017 Premiership final victory over Exeter Chiefs, and was part of the Harlequins squad which went on to win the 2021 final. Scoring 23 tries in his 53 Premiership appearances prior to joining the Falcons in July 2021, Earle scored on his England debut in the non-cap match against the Barbarians in 2017 and was called up for England’s tour of Argentina the same year. A proven finisher, the former England Under-20s and 18s cap has even won New Zealand’s National Provincial Championship, scoring for a star-studded Canterbury side in the 2016 final during a successful loan spell. Earle scored three tries in his 11 appearances for the Falcons during the 2021-22 campaign.