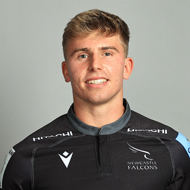 Louie Johnson joined the Falcons’ senior academy in the summer of 2021, having come through the junior academy. Louie started his DPP journey in Cumbria a year earlier than most, at the age of 12. He featured in all the Falcons’ age group teams and moved to Sedbergh School for Sixth Form. A central figure for England Under-18s, Louie played for the Falcons A-Team against England Under-20s during the 2020-21 season, scoring a sensational solo counter-attack try from 50 metres out to make his mark on the adult game.