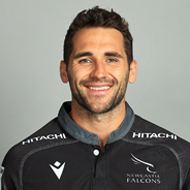 Ollie Lindsay-Hague is a two-time Olympian who joined Newcastle Falcons in August 2021 on an initial four-month deal. Having played 61 games for Harlequins, scoring ten tries for the London club, in 2016 he concentrated full-time on his international sevens career. Helping Team GB to an Olympic silver medal in Rio 2016, Lindsay-Hague featured again in the Tokyo games during 2021, his GB side missing out in the bronze medal match against Argentina. A Sevens Rugby World Cup finalist who has also represented England in the Commonwealth Games, Lindsay-Hague can play across the back three in 15s, where he is renowned for his pace and footwork.