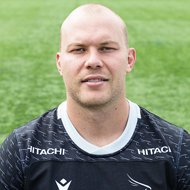 Seb returned for a second spell at Newcastle Falcons in the summer of 2022, having helped the club to promotion during the 2019-20 Championship-winning season. The 6 foot 7 former South African Under-20s international has played for Leicester Tigers and London Irish in England as well as French club Mont de Marsan. He re-joined the Falcons from American side Austin Gilgronis, having helped them to top spot in the Western Conference of Major League Rugby in 2022.