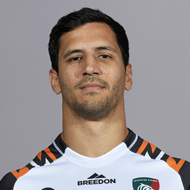 Matias joined the Falcons in the summer of 2022, having helped Leicester Tigers to win the 2021-22 Gallagher Premiership title. Starting in the Twickenham final for the Tigers, the Buenos Aires native brings a huge amount of big-game experience to the North East and boasts 'intensity' as his chief attribute. Capped more than 50 times by Argentina, he has also represented his homeland at Sevens during the 2016 Olympic Games in Rio de Janeiro, having began his career with Club Universitario de Buenos Aires (CUBA) in his home city. An experienced campaigner at Super Rugby level, he played 47 times for Jaguares, including starting in their 2019 Super Rugby final against the Crusaders.