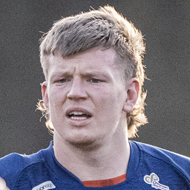 Josh Peters joined Newcastle Falcons in the summer of 2022 from Doncaster Knights. Standing at 6 foot 8 (2.04m) and weighing 18 stone 5 (117kg), he was born just outside London, moving to Marbella with his family at the age of two. Josh grew up in Spain and played there until he was 16, when he got a scholarship to go to Oundle School and linked up with Northampton Saints’ academy. From there he got involved with England Under-18s and 19s, playing on dual-registration for Coventry during his time with Northampton Saints before moving to Blackheath. Playing international rugby for Spain, the fluent Spanish speaker played a season with French club Dijon before joining Doncaster, from where he made the move north to Kingston Park.