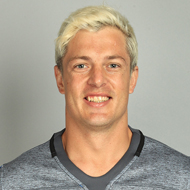 South African fly-half Tian joined the Falcons in the summer of 2022 from Bath Rugby. Born and raised in Pretoria, he spent six years with the Bulls and Blue Bulls before heading to France for a season with Bordeaux, returning to South Africa where he starred for the Cheetahs in the Pro 14 prior to joining Bath in January 2021. Tian played just five games for Bath after suffering a serious knee injury, but hopes a fresh start at the Falcons can see him back to his attacking best.