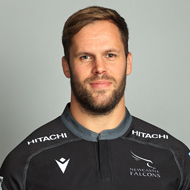 Back-row forward Will Welch became the Falcons youngest ever club captain in 2012 when at the age of 22 he took on the leadership role, leading them for seven seasons before handing over the reins in the summer of 2019. Skippering the side to the Championship title in his first season he has since led them in the Premiership, where his tireless work ethic and relentless tackling have marked him as a stand-out performer. Beginning his rugby with Northern RFC at junior level, Welch joined the Falcons Academy fresh from his time at Newcastle’s Royal Grammar School, from where he made his senior Falcons debut as a 17-year-old in an Anglo-Welsh Cup game at Newport Gwent Dragons. After spending time with local club Blaydon and representing England at Under 18s, 19s and 20s level, Welch signed full professional terms with Newcastle Falcons in 2009 and has become a mainstay of the forward pack. Passing the 200 mark during 2017-18 after a typically combative campaign, Welch's season was ended after suffering a knee injury during the home win over Sale Sharks. Back for a sixth season as skipper in 2018-19, Welch ended the campaign by signing a new four-year contract in the summer of 2019, handing over the captaincy but remaining an integral part of the squad. Helping the club to promotion in 2019-20, Welch passed the 250 appearance milestone in the home win over Northampton in May 2021, and appeared a further 19 times during a typically combative 2021-22 season.