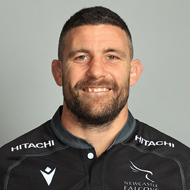 Mark Wilson joined Newcastle Falcons' coaching team in the summer of 2022, focusing primarily on contact skills and assisting with defence. A club legend as a player, the Cumbrian flanker scored 42 tries in his 237 games for the Falcons. Wilson also won 23 caps for England between 2017 and 2021, playing in the 2019 Rugby World Cup final and winning the 2020 Six Nations Championship. His coaching journey saw him working with England Students in the spring of 2022 when they defeated French Universities at Kingston Park, as well as assisting with his local club, Ryton RFC.