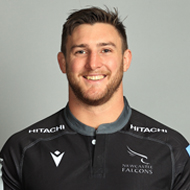 A product of Kings School, Worcester, Sean has enjoyed a number of life experiences through rugby, including a period spent in Australia. After returning to the UK he enrolled at Durham University where he successfully completed a degree course in physics. Whilst at the university Robinson represented England Students during the 2013/2014 season before signing full professional terms with Newcastle Falcons the following summer. Having begun the 2013/14 season on dual registration with Championship side Rotherham Titans, Robinson returned to Newcastle Falcons ahead of the autumn cup window, coming off the bench to make his first team debut against Bucharest Wolves before scoring his first Falcons try in the club’s 30-23 European Rugby Challenge Cup victory over Stade Francais. Robinson made his Aviva Premiership debut later that season away to Bath, making a further two league appearances to take his tally for that season up to 11. The Lock signed a new deal with Newcastle Falcons at the start of 2015/16, ending the season as the second-highest line-out taker in the division, according to the Opta stats, before featuring six times in an injury-interrupted 2016-17 Premiership season. Continuing his consistent form with 17 Premiership appearances during 2017-18, Robinson endured an injury-hit 2018-19 season due to a broken arm but returned to finish the campaign, signing up for another four seasons in the summer of 2019. Helping the team to promotion during 2019-20, a strong 2020-21 season saw him scoring five tries in 19 appearances, including some as captain. That was enough to earn him an England call-up for their 2021 summer tests, only for a knee injury sustained in national training to deny him a first full cap. He played 22 times during the 2021-22 season, scoring two tries, and was once again one of the most consistent performers for the Falcons.