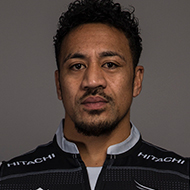 Born in Wellington, Sinoti Sinoti signed for Falcons midway through the 2013-2014 season. The winger began his professional career with a two-year stay in France, initially with Toulon and later Castres Olympique. Moving back to his native New Zealand, the Samoan International spent a season at Hawkes’ Bay before reappearing in Europe with Italian side Aironi. Following a stint back in Wellington with his home town club for their 2013 ITM Cup campaign, Sinoti found his way to England with Falcons, where he quickly became a fan favourite thanks to his determination, aggression and quick feet. Having settled in the North East both on and off the field, Sinoti made his mark on the club the following season; his fast-paced attack and fleet-footed style of play gaining him plaudits as one of the top players in the league. An impressive season saw Sinoti awarded Players’ Player of the Season at the club’s 2015 end of season awards, as well as being named in the Aviva Premiership Dream Team. The 2015-16 campaign proved tougher going as an injury sustained on international duty saw him miss the Rugby World Cup, mid-season surgery restricting him to just five league outings. In 2016-17 he scored the winner against Sale Sharks on the Premiership's opening night, going on to make 16 league appearances that term. 2017-18 saw no let-up in Sinoti's blockbusting contribution, scoring the Premiership's try of the season in the home win over Exeter in a campaign which brought four tries in his 16 league outings, as well as a summer recall to the Samoan national side. In 2018-19 Sinoti was once again a regular presence on the left wing, tries coming against Gloucester away, Worcester away, Bath at home and Edinburgh at home.