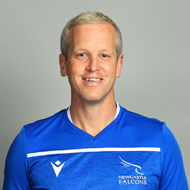 Dave Walder steered the Falcons to cup final glory in 2001 and 2004, the Durham University graduate playing four tests for England between 2001 and 2003. The fly-half made 87 Premiership appearances during his seven seasons at Kingston Park before going on to domestic and European glory with London Wasps. Walder retired from playing after a two-year stint with Japanese club Mitsubishi Dynaboars, joining Newcastle initially as kicking coach before being promoted to attack coach in the summer of 2015 and becoming head coach in 2017. In the summer of 2019 Walder was called up to coach England's backs in their home win over a star-studded Barbarians side, before returning to club duties.